EIGASAI 2019 returns to the Shangri-La Plaza

The 2019 edition of the Japanese Film Festival, popularly known as the EIGASAI, comes back to Shangri-La Plaza as it kicks off the season at the Red Carpet from July 3 to 14, 2019.The Japan Foundation, Manila is bringing 14 full-feature films of diverse genres and themes to the Shang for its 22nd year. EIGASAI continues its tradition of screening films to viewers of all ages and interests.

“We are more than happy to welcome the beloved EIGASAI back here at the Shang, especially now that we have already finished the upgrades to the Red Carpet Cinema’s facilities,” says Shangri-La Plaza EVP and General Manager, Lala Fojas. “We hope that our improved services will provide no less than the best cinema experience to followers of EIGASAI.”

The Japanese Film Fest 2019 opens at the Shang with the historical drama, Samurai Marathon, directed by Bernard Rose. Based on Dobashi Akihiro’s novel Bakumatsu Marathon Samurai, the film is about the Ansaei Tooashi, known as Japan’s first marathon. The story revolves around how Annaka feudal lord Itakaru Katsuakira organized a run across mountain roads to get his samurai warriors in shape. But one misstep turned a simple race into a rebellion in the eyes of the Bakufu central government that ordered a stop to what it thought was an uprising.

Acclaimed director Kore-eda Hirokazu has two films showing at the festival. After the Storm, a family drama about an up and coming author who gets another shot at life; and The Third Murder, a psychological thriller about a convicted murderer who is facing death penalty, and the complications that arise once his lawyer tries to reduce the sentence to life imprisonment. 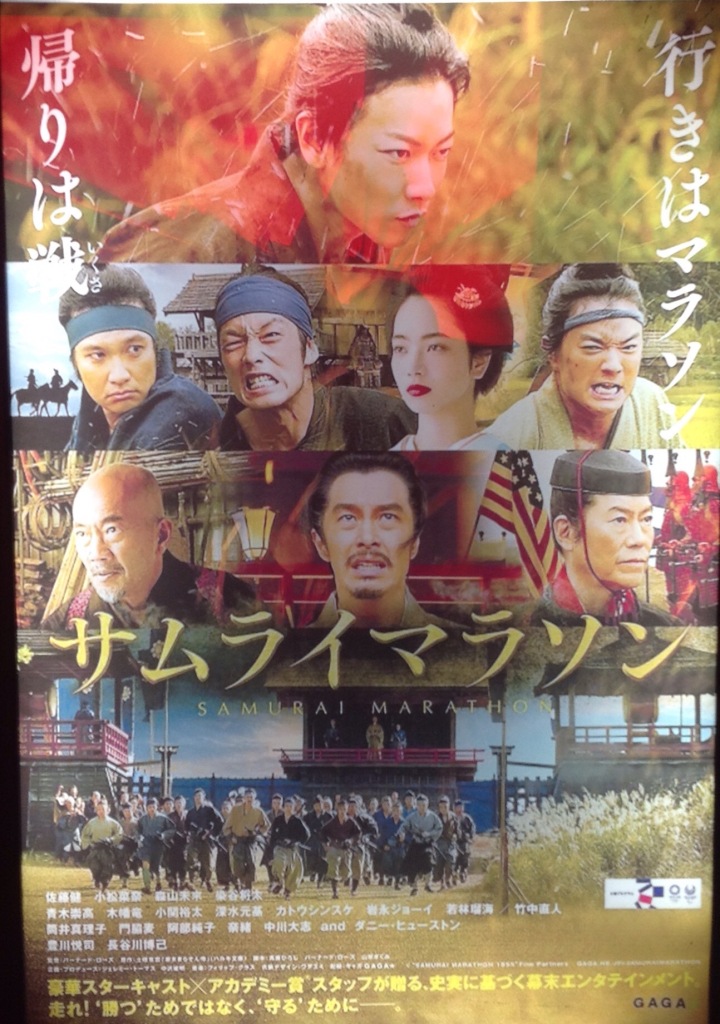 EIGASAI also features two animated films. Lu Over the Wall is about a young man’s arrival at fishing town where he joins a high school band that rehearses in an island inhabited by a mermaid; while Mirai tells the story of a little boy who encountered a teenage girl from the future who claimed that she is the newborn sister he hates.

In the poignant story of The 8-Year Engagement, an engaged couple pauses their plans after the bride-to-be falls into a coma. While in the film a Perfect World, an architect paralyzed from the waist down tries to rekindle the relationship with his first love.

A “table tennis girl wonder” returns home to reconnect with her mom’s old tennis club in her quest to beat her ex in dramedy Mixed Doubles. An indie film crew shooting a zombie movie in an abandoned building in a mountain gets unwanted guests in One Cut of The Dead.

The film fest is also presenting two films based on popular manga series. Laughing Under the Clouds is the 2018 adaptation of Karakarakemuri that centers around the Kumo brothers and their attempt to stop the awakened Orochi snake demon from endangering the world after the Meiji Restoration. Kakegurui is a tale about the lives of the students at an elite school who use gambling to determine their fates until a newcomer—a compulsive gambler—disrupted the hierarchy of the student council and the entire campus.

EIGASAI’s roster includes The Crimes that Bind, a whodunit film that starts with an unresolved death linked to a theater director, a charred corpse, and a past that haunts one of the detectives, and Yakiniku Dragon, an adaptation of an award-winning play about a Korean family running a yakiniku restaurant in the Kansai region in the 70s.

One film that hits close to home is The Tears of Malumpati, which is based on the true story of the Pandan Water Pipeline Project in Panay Island, where a young Japanese woman and a 5-year-old girl break cultural barriers to start a friendship over origami and a picture book.

Aside from EIGASAI, the Shang has also prepared a round of activities all throughout the Philippines-Japan Friendship Month this July. Mall guests can explore the Katana and Armour exhibits by Geisha’s Blade Philippines Samurai Sword Shop on July 5-7 and July 12-14 in the East Atrium and marvel at the showcase of wonderfully crafted Japanese-style swords and samurai armour.

The Shang patrons will also be treated to a live performance of Tsugaru shamisen player Keisho Ohno known for his fusion of Japanese traditional music and rock ‘n roll on July 6 at the Grand Atrium. On the same day, the Shang guests can explore Japanese martial arts with world-renowned sensei Tetsutaka Sugawara who will do a demo at the Grand Atrium and the IGA Kendo Club at the East Atrium.

Student organization University of the Philippines’ Tomo-Kai has also been tapped to celebrate Philippine-Japanese ties and help promote Japanese culture with interactive activities at the Shang.

Mall guests will get a glimpse of Japan as the Shang gets inspiration from the scenic spots like Arashiyama Bamboo Grove and Nara Park Deer Sanctuary for its décor. Guests will also have a chance to purchase their own kimono and other unique Japanese finds starting July 5 at Level 1, Main Wing.

#FeelTheShangVibe, celebrate Philippines-Japanese Friendship Month and get first dibs on #EIGASAI2019 at Shangri-La Plaza. Expect no less than the best #ShangXEigasai2019 experience only at the Red Carpet!