Former Senator Bongbong Marcos on Oct. 5,2017 announced at the Pandesal Forum in 78-year-old Kamuning Bakery Café in Quezon City that he expects the recount of 2016 vice presidential election to start this month.

He said that there was nothing definite yet about reported possibility of final settlement between the Marcos family and the Philippine government about the alleged wealth, but he hopes decades of bitter political disunity shall end and that the nation can have social harmony.

Marcos expressed confidence in the leadership of the fearless, sincere, decisive & reformist President Rody Duterte, that he can overcome foes seeking to oust his government “out of their political ambitions”. He cited Duterte’s successes include achieving better peace & order, initiating many new infrastructure projects and other pro-people reforms.

Marcos also said that he hopes any proposed new BBL bill for Muslim region of Mindanao shall be fair and beneficial to all, that hopefully this wouldn’t lead to a situation similar to the on-going crisis in Spain with its Catalonia region now seeking to become independent.

Bongbong Marcos also lamented that their archrivals in politics have spent a lot of money to spread “fake news” to fool thousands of Marcos loyalists and others to recently go by busloads to U.P. Los Banos by promising them free money, he added that this fake news was orchestrated as deliberate black propaganda to continuously besmirch the name of the Marcos family.

On the issue of fake news proliferation on cyberspace, Bongbong Marcos expressed support for respecting and upholding inviolable freedom of expression of the Internet and social media.

Marcos said that bloggers shouldn’t be censored, but allow the free marketplace of ideas and blogs to eventually determine which blogs shall rise or fall based on their track records credibility, truthfulness and fairness of opinions.

On the question of whether his elder sister Ilocos Norte Governor Imee might possibly run for the Senate in the 2019, Bongbong didn’t confirm nor deny such speculations; he said he doesn’t know about her political plans, but he added: “l believe Governor Imee Marcos would make a great senator, she is very smart.” 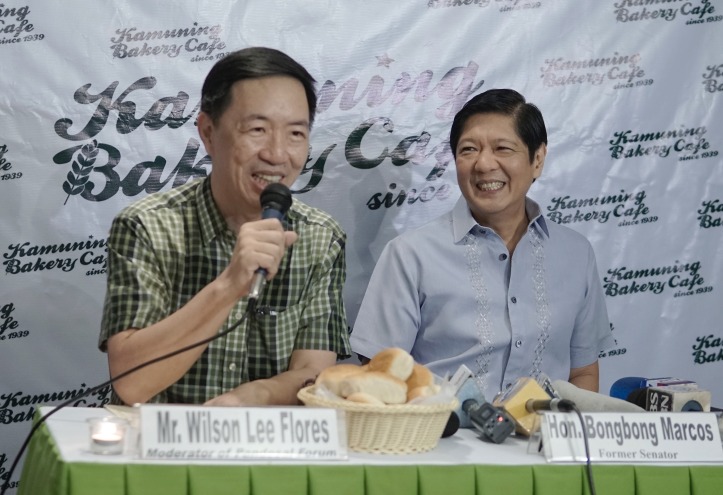